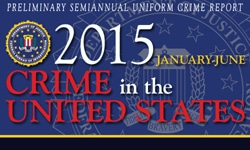 The FBI’s latest Preliminary Semiannual Uniform Crime Report, which contains data from January to June of 2015, revealed overall declines in the number of property crimes and overall increases in the number of violent crimes reported by law enforcement when compared to figures from the same time in 2014. According to the report, property crime was down 4.2 percent overall from 2014, and violent crime was up 1.7 percent overall.

The full Crime in the United States, 2015 report will be released later this year.

In 2013, the FBI’s UCR Program initiated the collection of rape data under a revised definition within the Summary Based Reporting System. The term “forcible” was removed from the offense name, and the definition was changed to “penetration, no matter how slight, of the vagina or anus with any body part or object, or oral penetration by a sex organ of another person, without the consent of the victim.”

The number of rape incidents reported using the revised definition, as well as the number of rapes submitted using the legacy definition, are both included in this report in separate columns in each table. The rape figures for those agencies that changed from reporting rape under the legacy definition in 2014 to the revised definition in 2015 are not included in the trend calculations for Tables 1-3, but they are included in Table 4. Please note: Rape data reported for 2014 and 2015 cannot be aggregated by all agencies. Instead, two distinct groups of agencies (those reporting using the legacy definition and those reporting using the revised definition) are used for calculating trends. Therefore, the percent changes from one year to the next within each group are calculated with fewer agencies than in recent years. Offenses with fewer counts are often sensitive to minor differences when calculating trends. More information about this subject is presented in footnotes and data declarations for each table.

Caution against ranking: When the FBI publishes crime data via its UCR Program, some entities use the information to compile rankings of cities and counties. Such rankings, however, do not provide insight into the numerous variables that shape crime in a given town, city, county, state, tribal area, or region. These rankings lead to simplistic and/or incomplete analyses that can create misleading perceptions that adversely affect communities and their residents. Only through careful study and analyses into the range of unique conditions affecting each local law enforcement jurisdiction can data users create valid assessments of crime. The data user is, therefore, cautioned against comparing statistical data of individual reporting units from cities, metropolitan areas, states, or colleges or universities solely on the basis of their population or student enrollment.